MCP: The Arthur of the Comics Project Blog

The Arthurian material collected in this volume ranges widely in time and space, from a Latin romance based on Welsh sources to the post-Christian Arthur of modern fiction and film. It begins with a tribute to the late Derek Brewer, a reprinting of the classic introduction to his edition of the last two tales of Malory's Morte Darthur. Further subjects covered include a possible source manuscript for Malory's first tale; the `Arthuricity' of the little-known Latin romance Arthur and Gorlagon; images of sterility and fertility in the continuations of Chretien's Conte du Graal; and early modern responses to Geoffrey of Monmouth's account of Arthur's dealings with Rome. Norris Lacy ranges widely over the evolution of the Arthurian legend, and Ronald Hutton considers representations of both Christian and pagan religion in modern novels and cinema. The volume ends with a bibliographical supplement on recent additions to Arthurian fiction.


Contents
General Editors' Preface
1 Introduction to the Morte Darthur, Parts 7 and 8
Derek S Brewer
2 Malory's Text of the Suite du Merlin
Jonathan Passaro
3 Why Arthur at all? The Dubious Arthuricity of Arthur and Gorlagon
Amanda Hopkins
4 The Aesthetics of Communication: Sterility and Fertility in the Conte del Graal Cycle
Thomas Hinton
5 'Whyche thyng semeth not to agree with other histories...': Rome in Geoffrey of Monmouth and his early modern readers
Sian Echard
6 Arthurian Texts in their Historical and Social Context
Norris J Lacy
7 The Post-Christian Arthur
Ronald Hutton
8 Supplement: The Arthurian Legend in Literature, Popular Culture, and the Performing Arts, 2004-2008
Raymond H Thompson and Norris J Lacy
Posted by The Virtual Society for the Study of Popular Culture and the Middle Ages at 5:22 PM No comments:

Comic book publisher Boom Studios has recently published a four-part series called Muppet Robin Hood that recasts the Muppets as characters from the Robin Hood legend. The series (also available as a collected edition) can be ordered direct from the publisher. A forthcoming series called Muppet King Arthur is due out this month, though Boom Studios does not yet have any information online about this series.
Posted by The Virtual Society for the Study of Popular Culture and the Middle Ages at 5:04 PM No comments: 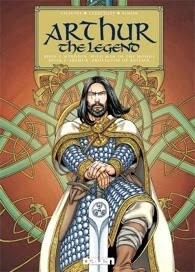 David Chauvel, Jérôme Lereculey, and Jean-Luc Simon's graphic album series Arthur, Une Épopée Celtique is finally available in English from Welsh publisher Dalen. The series was originally published in French and has been translated into multiple languages, include German and Welsh (the last also from Dalen).

The Dark Ages were a time of change and turmoil across Europe. After reigning supreme in Britain for 300 years the Romans returned to the continent, leaving the Isle of the Mighty in the hands of its original inhabitants, the Britons.

Coveted by marauding Saxons from the east, pillaging Irish from the west, and fearsome Picts from the north, Britain’s bountiful pastures were under constant siege.
With neverending quarrels and inter-tribal warring between the Britons themselves, Britain was ready for a strong and mighty leader to rally its people and repel the invading hordes.

This leader was to be Arthur, born to return the Island of Britain to its rightful owners – the Britons. His fame and stature would transcend the centuries and remain as enigmatic today as it has always been.

Over those centuries, Arthur’s achievements have captivated poets, writers and storytellers from numerous cultures and backgrounds. But Arthur The Legend returns to the roots of the story of Arthur, to the tales and historical sources of Celtic Britain.

Those ancient roots lie deep within the Celtic tradition of Wales, kept alive in age-old prose, poetry and historical documents such as the Historia Brittonum, Annales Cambriae and the Mabinogion. It is from these sources that Arthur The Legend finds its milieu and gives us an authentic rendition, through the pages of a gripping graphic novel, of those early tales of Arthur from an age well before the Norman Arthurian Romances.

As the first volume in a series of four, Arthur the Legend begins with Vortigern’s treachery in granting the Saxons a foothold in Britain, which in turn drives him to seek assistance from the original Merlin, or Myrddin the Mad, the wild man of the woods. Myrddin is the druid, prophet and seer who recognises the young Arthur as the son of prophecy who will grow and save his people. With his heroic rise as warlord, Arthur leads his people from one decisive battle to the next in his ruthless quest to keep his land free from the Saxon foe.

Author David Chauvel is Series Director at the French publishing house Delcourt, and has collaborated with illustrator Jérôme Lereculey since the 1970s. As Celtic Bretons, both have been drawn to recount the long ignored, and ancient Welsh version of the Arthur story in a magnificent and detailed series of graphic novels.

Also available in Welsh as Chwedl Arthur.
Posted by The Virtual Society for the Study of Popular Culture and the Middle Ages at 11:43 AM No comments: