The session has been cancelled due to lack of interest.

Please consider submitting a proposal for The Comics Get Medieval 2012 sessions to convene at PCA/ACA in Boston and (pending approval) at Kalamazoo. 2012 is the 75th anniversary of Prince Valiant, and it would be great to make ourselves visible as we commemorate this landmark event.

Blog and Listserv Editor
Co-Founder
Posted by The Virtual Society for the Study of Popular Culture and the Middle Ages at 8:50 PM No comments:

Labels: Comics Get Medieval, The Virtual Society for the Study of Popular Culture and the Middle Ages

The Society is pleased to announce the relaunch of KingArthurForever.org as a blog dedicated to study and debate of the representations of the Matter of Britain in post-medieval popular culture produced from the close of the Middle Ages through tomorrow.
Posted by The Virtual Society for the Study of Popular Culture and the Middle Ages at 8:37 PM No comments:

Labels: The Virtual Society for the Study of Popular Culture and the Middle Ages 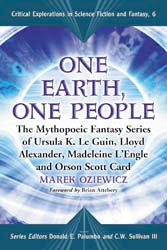 Description
This work presents the genre of mythopoeic fantasy from a holistic perspective, arguing that this central genre of fantasy literature is largely misunderstood as a result of decades of incomplete and reductionist literary studies. The author asserts that mythopoeic fantasy is not only the most complete literary expression of a worldview based on the existence of supernatural or spiritual powers but that the genre is in a unique position to transform social consciousness with a renewed emphasis on anticipating the future. The author lays out theoretical foundations for his argument in the first four chapters and then demonstrates how the works of fantasy authors Ursula K. LeGuin, Lloyd Alexander, Madeleine L’Engle, and Orson Scott Card exemplify his argument in the remaining four chapters.

Award Winner
Winner, Mythopoeic Scholarship Award in Myth and Fantasy Studies--The Mythopoeic Society
Posted by Blog Editor, The Association for the Advancement of Scholarship and Teaching of the Medieval in Popular Culture at 4:29 PM No comments: 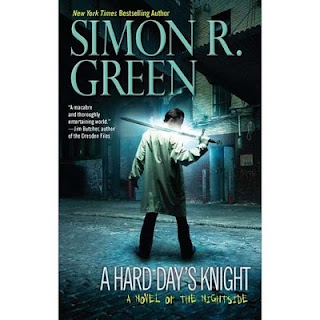 The latest in Simon Green's Nightside series is Arthurian in content.

Here are the details from publisher Ace Books:

John Taylor is a P.I. with a special talent for finding lost things in the dark and secret center of London known as the Nightside. He's also the reluctant owner of a very special-and dangerous-weapon. Excalibur, the legendary sword. To find out why he was chosen to wield it, John must consult the Last Defenders of Camelot, a group of knights who dwell in a place that some find more frightening than the Nightside.

London Proper. It's been years since John's been back-and there are good reasons for that.


Amazon.com has additional information from Publisher's Weekly. Apparently the series has always had some Arthurian content, but this seems the most Arthurian (I think).

Private investigator John Taylor returns in the 12th novel (after 2010's The Good, the Bad, and the Uncanny) of the Nightside, "the dark, secret, brooding heart of London." Having killed the former Walker, the voice of the Authorities, Taylor's now the closet thing the Nightside has to a leader. When the sword Excalibur shows up in the mail, he must return to London Proper to consult with the descendants of the Knights of the Round Table. The blood runs red (and golden) as he teams up with King Arthur and tangles with Merlin, elven royalty, traitor knights, sons of the devil, the Lady of the Lake, and various creatively named denizens of the Nightside. Taylor's irrepressible sarcasm and a twisted take on quotidian scenes compensate for a few too many solemn, self-important pronouncements and evil-overlord lectures. (Jan.)

Posted by The Virtual Society for the Study of Popular Culture and the Middle Ages at 3:54 PM No comments:

Orson Scott Card's latest novel The Lost Gate, book one of the Mither Mages trilogy, features a number of figures from Norse mythology. The publisher's website has sketchy information on the plot (after the jump), but the trailer for the book (below) is told from Loki's perspective.


Read more »
Posted by The Virtual Society for the Study of Popular Culture and the Middle Ages at 12:27 AM No comments:

The following represent this month's medieval-themed listings for Chiller. Of note are 3 mini-marathons of Forever Knight and multiple airings of The Forsaken. Both feature vampires from the Middle Ages and their attempts to survive in the twentieth century.


Also airing this month: Buffy The Vampire Slayer and Poltergeist: The Legacy.

Posted by The Virtual Society for the Study of Popular Culture and the Middle Ages at 12:07 AM No comments: