Here is advance notice for the Spring 2014 number of SMART. Orders can be placed at their website: http://webs.wichita.edu/?u=smart. 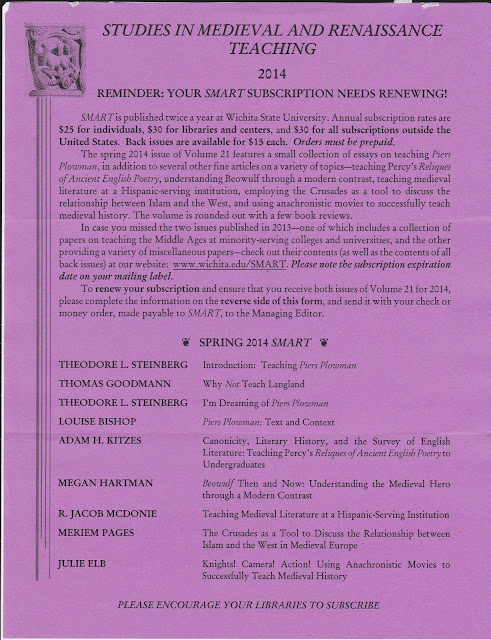 Posted by Blog Editor, The Association for the Advancement of Scholarship and Teaching of the Medieval in Popular Culture at 1:56 PM No comments:

The latest number of Studies in Medieval and Renaissance Teaching was released earlier this season. Contents as follows. As always, SMART can be purchased at http://webs.wichita.edu/?u=smart.

The Fall 2013 issue of Volume 20 of Studies in Medieval and Renaissance Teaching departs from a collection focusing on a single topic, which has taken the spotlight in several previous issues of SMART, to a glowing assortment of essays on a variety of engaging subjects. Gina Brandolino compares The Book of Margery Kempe to O. J. Simpson’s If I Did It, while Misty Schieberle shows us an approach to teaching Chaucer’s Nun’s Priest’s Tale using barnyard pedagogy. Michael Evans offers us “A Land War in Asia,” the relevance of medieval history to contemporary religious conflict in the Middle East. Crystal Hall shares a board game she created to encourage students to read the entire epic poem Orlando Furioso. Molly Martin’s essay examines Malory’s Launcelot and Gwenyver in the twenty-first-century classroom. Michael Livingston shows how he bridges mythology and medieval literature in teaching the medieval Orpheus. Karolyn Kinane offers an example of student-centered pedagogy by teaching Arthurian legends in a general education course. Joseph Candido rounds out the essays with his paper on teaching students to listen to Shakespeare. This broad range of subjects and approaches illustrates the interdisciplinary and multidisciplinary nature SMART. As always, a few excellent book reviews are included.

Posted by Blog Editor, The Association for the Advancement of Scholarship and Teaching of the Medieval in Popular Culture at 1:49 PM No comments:

CFP: From eald to new: Translating early medieval poetry for the 21st century

Posted by The Virtual Society for the Study of Popular Culture and the Middle Ages at 10:38 PM No comments: