THE EVERGREEN ROMANCE:
THE RECEPTION OF SIR GAWAIN AND THE GREEN KNIGHT IN POPULAR CULTURE


The Society for the Study of Popular Culture and the Middle Ages invites proposals for 15 to 20 minute presentations exploring the theme of "The Evergreen Romance: The Reception of SIR GAWAIN AND THE GREEN KNIGHT in Popular Culture." We have two sessions to fill and hope to explore a variety of media.

Despite our temporal and spatial distance from the Middle Ages, medieval themes proliferate in post-medieval culture, especially popular culture, and attest to the veracity of Umberto Eco’s observation that “people like the Middle Ages.” Medievalists, as both teachers and consumers, are as intrigued by these new representations of the medieval as non-specialists are, though fruitful academic discussion of such material has been limited when compared against the vast corpus of available medievalisms. It is the goal of the Society for the Study of Popular Culture and the Middle Ages to foster and encourage further investigation into the relationship between Medieval Studies and popular culture research.

For our sixth anniversary sessions, we propose a set of two sessions devoted to the post-medieval reception of the fourteenth century, alliterative romance now known as SIR GAWAIN AND THE GREEN KNIGHT. Virtually unknown until its rediscovery by Sir Frederic Madden in 1829, SIR GAWAIN AND THE GREEN KNIGHT is now considered a masterpiece of Western literature and taught to students at a variety of levels. Medievalists are especially familiar with this text and with the voluminous corpus of scholarship that has been produced since Madden’s own 1839 study, SYR GAWAYNE: A COLLECTION OF ANCIENT ROMANCE-POEMS BY SCOTISH AND ENGLISH AUTHORS, RELATING TO THAT CELEBRATED KNIGHT OF THE ROUND TABLE. In addition to its reception by antiquarians and scholars, SIR GAWAIN AND THE GREEN KNIGHT has also inspired a variety of creative artists, whose work is largely unknown and unexplored by medievalists.

In furtherance of our goals of illuminating the use of medieval themes in post-medieval popular culture, we intend in these sessions to sample the various ways that this unique work, an evergreen romance adaptable to any age and situation, has been received by creative artists of the nineteenth, twentieth, and early twenty first centuries. Presentations in the two-session “The Evergreen Romance: The Reception of SIR GAWAIN AND THE GREEN KNIGHT in Popular Culture” will assess the impact of the romance in popular culture by highlighting the use of this text by authors of children’s books, comic book writers and artists, composers, filmmakers, illustrators, librettists, musicians, novelists, playwrights, poets, and translators.

Please submit a 250-500 word proposal and completed Participant Information Form (available at http://www.wmich.edu/medieval/congress/submissions/index.html) to the organizing committee at Popular.Culture.and.the.Middle.Ages-at-gmail-dot-com by 1 September 2009. Please include the words “Evergreen Romance” in the subject line.

Labels: International Congress on Medieval Studies, Kalamazoo, The Society for the Study of Popular Culture and the Middle Ages

ROUND TABLE on
WHY ARTHUR?
REFLECTIONS ON THE INTERNATIONAL APPEAL OF THE
MATTER OF BRITAIN IN THE POST-MEDIEVAL WORLD


The Alliance for the Promotion of Research on the Villains of the Matter of Britain and the Society for the Study of Popular Culture and the Middle Ages invites proposals for 10- to 15-minute presentations exploring the theme of "Why Arthur? Reflections on the International Appeal of the Matter of Britain in the Post-Medieval World." We are especially interested in hearing the perspective of scholars outside of North America.

To paraphrase Umberto Eco, people seem to like King Arthur and the members of his court at Camelot. The Matter of Britain is at least a millennium and a half old, and, despite its advanced age, the Arthurian legend, as eternal as the Once and Future King at its core, remains a vibrant source for creative artists and propagandists to draw upon. Our round table session on “Why Arthur? Reflections on the International Appeal of the Matter of Britain in the Post-Medieval World” will explore some of the reasons why Arthuriana remains popular. We are particularly interested in answering the following question: Is the Arthurian legend simply a good story, which appeals to individuals around the world, or is there another reason (e.g. nostalgia for a lost age or hope for a better world) beyond the worldwide distribution and popularity of the Matter of Britain, even in countries with little or no ties to British culture? Participants in these sessions will offer a global perspective on the reception and appropriation of Arthurian characters—both heroes and villains—and themes from the end of the Middle Ages to the present.


Please submit a 250-500 word proposal and completed Participant Information Form (available at http://www.wmich.edu/medieval/congress/submissions/index.html) to the organizing committee at Popular.Culture.and.the.Middle.Ages-at-gmail-dot-com by 1 September 2009. Please include the words “Why Arthur?” in the subject line.

Labels: International Congress on Medieval Studies, Kalamazoo, The Society for the Study of Popular Culture and the Middle Ages

Sponsored by THE SOCIETY FOR THE STUDY OF POPULAR CULTURE AND THE MIDDLE AGES
For "Time, Temporality, History": 31st Annual Medieval and Renaissance Forum, Plymouth State University (Plymouth, NH), 16-17 April 2010


The Society for the Study of Popular Culture and the Middle Ages invites proposals for inclusion in a session exploring re-creations of the medieval that have appeared since 2000. Potential subjects include comics, electronic games, films, fiction, music and musical theatre, television programs, and translations. We are especially interested in proposals focused on works of popular culture that have been ignored or maligned by previous scholarship.


Please submit proposals of approximately 500 words and a brief c.v. with complete contact information to the organizers at Popular.Culture.and.the.Middle.Ages-at-gmail.com and include the words "21st Century Medievalism Proposal" in the subject line. Proposals will be accepted until 31 December 2009.


Further details on the Medieval and Renaissance Forum can be found online at http://www.plymouth.edu/medieval/

Labels: Medieval and Renaissance Forum, The Society for the Study of Popular Culture and the Middle Ages

New book on Merlin: Stephen Knight's Merlin: Knowledge and Power through the Ages

Merlin: Knowledge and Power through the Ages
Stephen Knight 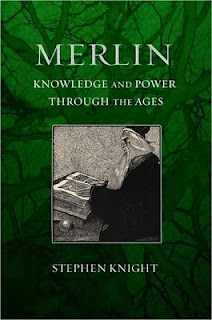 
Merlin, the wizard of Arthurian legend, has been a source of enduring fascination for centuries. In this authoritative, entertaining, and generously illustrated book, Stephen Knight traces the myth of Merlin back to its earliest roots in the early Welsh figure of Myrddin. He then follows Merlin as he is imagined and reimagined through centuries of literature and art, beginning with Geoffrey of Monmouth, whose immensely popular History of the Kings of Britain (1138) transmitted the story of Merlin to Europe at large. He covers French and German as well as Anglophone elements of the myth and brings the story up to the present with discussions of a globalized Merlin who finds his way into popular literature, film, television, and New Age philosophy.

Knight argues that Merlin in all his guises represents a conflict basic to Western societies-the clash between knowledge and power. While the Merlin story varies over time, the underlying structural tension remains the same whether it takes the form of bard versus lord, magician versus monarch, scientist versus capitalist, or academic versus politician. As Knight sees it, Merlin embodies the contentious duality inherent to organized societies. In tracing the applied meanings of knowledge in a range of social contexts, Knight reveals the four main stages of the Merlin myth: Wisdom (early Celtic British), Advice (medieval European), Cleverness (early modern English), and Education (worldwide since the nineteenth century). If a wizard can be captured within the pages of a book, Knight has accomplished the feat.

"Merlin is probably the most familiar character in the Arthurian legends, as his frequent appearances in popular culture attest. Stephen Knight's wide-ranging, thorough, insightful, and comprehensive study of the figure of Merlin should become the standard resource on the well-known wizard. Knight shows real familiarity with the major traditions relating to the figure of Merlin and to Arthurian literature in general-which is no mean feat when covering such a large body of material."—Alan Lupack, University of Rochester, author of The Oxford Guide to Arthurian Literature and Legend

"Stephen Knight's interpretations of the Arthurian sources and characters are provocative and stimulating. Knight displays much erudition herein and evaluates the literary material in new and interesting ways."—Christopher A. Snyder, Marymount University, author of The Britons and The World of King Arthur

Stephen Knight is Distinguished Research Professor in English Literature at Cardiff University. He is the author of books including Robin Hood: A Mythic Biography, also from Cornell.
Posted by The Virtual Society for the Study of Popular Culture and the Middle Ages at 4:54 PM No comments:

Airing later this week on BBC America is Episode 7 of the ITV series Primeval. The series features a team of researchers who investigate rifts in time. This episode features the appearance of a medieval knight.

BBC America's web site has a complete schedule for the series.
Posted by The Virtual Society for the Study of Popular Culture and the Middle Ages at 5:54 PM No comments:

Labels: Getting Medieval on Television, GMTV

Our co-sponsored session with the Alliance for the Promotion of Research on the Villains of the Matter of Britain has been approved for next Kalamazoo (May 2010). A call for proposals will be issued soon.


Also of note, the recent Sci Fi Channel film Book of Beasts is set to be released on DVD later this summer under the title Merlin and the Book of Beasts.


Don't forget to watch the BBC's Merlin in its American premiere on NBC beginning June 21.
Posted by The Virtual Society for the Study of Popular Culture and the Middle Ages at 10:17 PM No comments: