Terry Jones and the Medieval 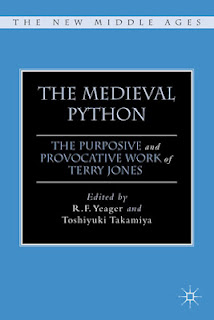 The Medieval Python: The Purposive and Provocative Work of Terry Jones (with additional information in the center from WorldCat)
The New Middle Ages
Edited By R. F. Yeager and Toshiyuki Takamiya

No one working today in Middle English studies or in period-related film and/or documentary can proceed untouched by Terry Jones' thought-provoking views. Through films such as Monty Python and the Holy Grail, educational television series for BBC and the History Channel, and books such as Chaucer's Knight and Who Murdered Chaucer?, Jones has applied his unique combination of carefully researched scholarship, keen intelligence, fearless skepticism of establishment thinking, and broad good humor to challenge, enlighten, and reform. The Medieval Python: The Purposive and Provocative Work of Terry Jones collects original essays by prominent and diverse medievalists in literature and history to celebrate the work of a dedicated independent scholar whose criticism has redirected how we understand the world of Chaucer and life in the Middle Ages.

"The Medieval Python: Essays presented to Terry Jones on the Occasion of His Seventieth Birthday collects original essays by eighteen prominent medievalists in literature and history to celebrate the work of a dedicated independent scholar whose consistently independent literary and historical criticism has several times redirected how we understand the world of Chaucer and his contemporaries. His film and television productions have entertained and educated generations of viewers about life in the Middle Ages"

The Medieval Works of Terry Jones--S.Ikeda

The Earl of Arundel, the War with France, and the Anger of King Richard II--C.Given-Wilson

Gower's Manuscript of the Confessio Amantis--P.Nicholson

The Naughty Bits: Dating Chaucer's House of Fame and Legend of Good Women--J.M.Bowers

The Silly Pacifism of Geoffrey Chaucer and Terry Jones--W.A.Quinn

Legs and the Man: The History of a Medieval Motif--R.F.Green

A Prayer Roll Fit for a Tudor Prince--J.J.Thompson

Macbeth and Malory in the 1625 Edition of Peter Heylyn's Microcosmus: A Nearly Unfortunate Tale-- T.Takamiya

About the Editors:
R.F. Yeager is a professor of English and Foreign Languages and chair of the department at the University of West Florida. He is President of the International John Gower Society and the editor of JGN: The John Gower Newsletter. He has written and edited more than seventeen books and collections of essays, including John Gower's Poetic: The Search for a New Arion; A Concordance to the French Poetry and Prose of John Gower; Who Murdered Chaucer? A Medieval Mystery, with Terry Jones, Terry Dolan, Alan Fletcher and Juliette Dor; John Gower: The Minor Latin Works; John Gower: The French Balades and Approaches to Teaching John Gower's Poetry, with Brian W. Gastle.

Toshiyuki Takamiya, MA, HonLittD (Sheffield), HonDLitt (Glasgow), FSA, is Professor Emeritus at Keio Univeristy. He co-edited Aspects of Malory, with Derek Brewer, and has published many books and articles on Malory, Hilton, and the history of the book. He is Director of the Early Book Society and the Editor-in-chief of Poetica.
Posted by The Virtual Society for the Study of Popular Culture and the Middle Ages at 7:30 PM No comments:

The official CFP for our roundtable session for next year's International Congress on Medieval Studies is now live and can be viewed at http://medievalstudiesonscreen.blogspot.com/2012/06/still-getting-medieval-on-television.html.
Posted by The Virtual Society for the Study of Popular Culture and the Middle Ages at 2:02 AM No comments:

Labels: Calls for Papers, Conferences of Interest, International Congress on Medieval Studies, The Virtual Society for the Study of Popular Culture and the Middle Ages

The Virtual Society for the Study of Popular Culture and the Middle Ages is pleased to announce that the Medieval Studies at the Movies website is now and forever Medieval Studies on Screen(and now available at http://medievalstudiesonscreen.blogspot.com/), a change designed to better reflect the realities of our access to medieval-themed texts on film, television, computers, and portable electronic devices.

We inagurate this change with the announcement of our proposal for next year's sessions for the International Congress on Medieval Studies: "Still Getting Medieval on Television: Medieval-Themed Television of the Twenty-first Century and Its Impact on Medieval Studies (Roundtable)". Full details at http://medievalstudiesonscreen.blogspot.com/2012/06/kalamazoo-2013-proposal.html.

Labels: Blog updates, Calls for Papers, Conferences of Interest, Getting Medieval on Television, GMTV, The Virtual Society for the Study of Popular Culture and the Middle Ages
Newer Posts Older Posts Home
Subscribe to: Posts (Atom)