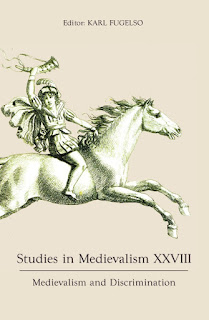 My thanks to Boydell & Brewer for providing a copy of this to add to our bibliographic efforts. It looks like another great volume of the long-running series.


The difficult and nuanced issue of discrimination - race, gender, ethicity, religion - is the focus of this volume.

Discrimination has long played a part in medievalism studies, but it has rarely been weaponized as thoroughly and publicly as in recent exchanges. The essays in the first part of this volume respond to that development by examining some of the many forms discrimination has taken in medievalism (studies) relative to race, gender, sexual orientation, religion, and ethnicity. These papers thus inform many of the subsequent chapters, which address a wide variety of aspects of medievalism, showing how many cultural areas it touches upon. Subjects include Evelyn Underhill's literary interest in the Arts and Crafts Movement; the Anchoresses of the filmmaker Chris Newby and novelist Robyn Cadwallader; cinematic battle orations; contemporary representations of Viking helmet horns; modern board-game culture; and Vincent Van Gogh's Studio of the South. The volume also includes a transcription and contextualization of the celebrated scholar Helen Waddell's notes on medieval texts.

KARL FUGELSO is Professor of Art History at Towson University.

An e-book version of this title is available (9781787444713), to libraries through a number of trusted suppliers. See here for a full list of our partners.

"You wouldn't want to be historically inaccurate": Online Responses to Race in Medievalist Television - Michael Evans


Work for the Soul: Medievalism, the Arts and Crafts Movement, and the Development of a Practical Spirituality in Evelyn Underhill's Novel The Gray World - Carla A. Arnell

Exhuming the Living Dead: The Anchoresses of Chris Newby and Robyn Cadwallader - Karen A Winstead

Vincent van Gogh, the Tre Corone, and the Studio of the South - Aida Audeh

Posted by The Association for the Advancement of Scholarship and Teaching of the Medieval in Popular Culture at 11:14 PM No comments: