Studies in Medievalism for 2013 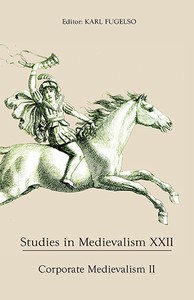 The 2013 volume of Studies in Medievalism, published as Corporate Medievalism II, has now been released. Details and contents as follows:

In the wake of the many passionate responses to its predecessor, Studies in Medievalism 22 also addresses the role of corporations in medievalism. Amid the three opening essays, Amy S. Kaufman examines how three modern novelists have refracted contemporary corporate culture through an imagined and highly dystopic Middle Ages. On either side of that paper, Elizabeth Emery and Richard Utz explore how the Woolworth Company and Google have variously promoted, distorted, appropriated, resisted, and repudiated post-medieval interpretations of the Middle Ages. And Clare Simmons expands on that approach in a full-length article on the Lord Mayor's Show in London. Readers are then invited to find other permutations of corporate influence in six articles on the gendering of Percy's Reliques, the Romantic Pre-Reformation in Charles Reade's The Cloister and the Hearth, renovation and resurrection in M.R. James's "Episode of Cathedral History", salvation in the Commedia references of Rodin's Gates of Hell, film theory and the relationship of the Sister Arts to the cinematic Beowulf, and American containment culture in medievalist comic-books. While offering close, thorough studies of traditional media and materials, the volume directly engages timely concerns about the motives and methods behind this field and many others in academia.

Karl Fugelso is Professor of Art History at Towson University in Baltimore, Maryland.

3 Our Future is Our Past: Corporate Medievalism in Dystopian Fiction (Amy S. Kaufman)

4 The Good Corporation? Google's Medievalism and Why It Matters (Richard Utz)

5 "Longest, oldest, and most popular": Medievalism in the Lord Mayor's Show (Clare A. Simmons)

7 Romancing the Pre-Reformation: Charles Reade's The Cloister and the Hearth (Mark B. Spencer)

9 Rodin's Gates of Hell and Dante's Inferno 7: Fortune, the Avaricious and Prodigal, and the Question of Salvation (Aida Audeh)


Posted by Blog Editor, The Association for the Advancement of Scholarship and Teaching of the Medieval in Popular Culture at 12:29 AM No comments:

Two recent calls for papers for special issues of Studies of Medieval and Renaissance Teaching from my fellow UConn alums. Full details on the MASSachusetts State Universities MEDIEVAL Blog by clicking the links below:

Posted by Blog Editor, The Association for the Advancement of Scholarship and Teaching of the Medieval in Popular Culture at 8:19 PM No comments:

Proposals for papers and/or complete sessions are now being accepted for the Second Annual Symposium on Medieval and Renaissance Studies to be held, from Monday, June 16 through Wednesday, June 18 2014, at the midtown campus of Saint Louis University. The conference is hosted by the Center for Medieval and Renaissance Studies. Details at their website at http://smrs.slu.edu/home. According to the site, "on-campus housing options include affordable, air-conditioned apartments and a luxurious boutique hotel"; in addition to housing, "Inexpensive dorm meal plans are available".
Posted by Blog Editor, The Association for the Advancement of Scholarship and Teaching of the Medieval in Popular Culture at 7:48 PM No comments:

Labels: Calls for Papers, Conferences of Interest, Symposium on Medieval and Renaissance Studies

Our Kalamazoo Proposal for 2014

Here is the text of our session proposals for next year's Medieval Congress. Wish us luck.

The Virtual Society for the Study of Popular Culture and the Middle Ages was founded in 2004 in a concerted effort, as our web site explains, “to promote and foster scholarship on and teaching and discussion of representations of the medieval in post-medieval popular culture and mass media.” Much of the success of our mission has occurred through our presence at the annual International Congress on Medieval Studies, and we hope that you can look favorably on our proposals organized in commemoration of our upcoming tenth anniversary.

Posted by The Virtual Society for the Study of Popular Culture and the Middle Ages at 12:10 AM No comments: