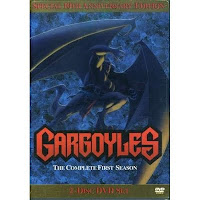 Gargoyles, a syndicated animated series created by Greg Weisman and starring a band of Gargoyles originally from tenth-century Scotland (and currently available, in part, on DVD), has recently returned in comics form in a series of 12 issues and a 6-issue spin-off comic, Gargoyles: Bad Guys, published by Slave Labor Graphics. Details on both series, and their cancellation, can be found on the series' Wikipedia page.

Essentially, both series present aspects of the unproduced third season of the television series. Arthurian characters are especially prominent in the second arc of the Gargoyles series.

Both comics series have been collected in manga-sized collections and include material that was unpublished due to each series' cancellation. They can be purchased on Amazon.com and direct from Slave Labor Graphics.

I append the details of each collection from the publishers web site:

Posted by The Virtual Society for the Study of Popular Culture and the Middle Ages at 10:35 PM