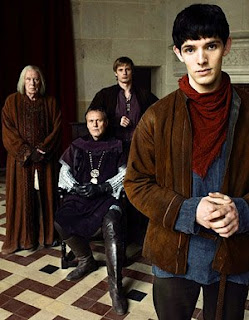 Merlin continues to air this month on NBC. Next up is "Excalibur," episode 9 (of 13), on Sunday, 2 August. Merlin appears to be bumped on the 10th for Sunday Night Football, but TVGuide.com includes the following airdates, two episodes back-to-back again, for the remainder of Season One:


The series takes considerable liberties with the Matter of Britain (take a look at the Wikipedia entry for some details) but makes for good family entertainment, though I think it would be better served if paired with another telefantastic program or on Syfy.

All episodes can be viewed at NBC.com, and the complete season is expected to be released on DVD to Region 1 this fall, along with a slew of tie-ins.
Posted by The Virtual Society for the Study of Popular Culture and the Middle Ages at 1:13 AM

Labels: Getting Medieval on Television, GMTV