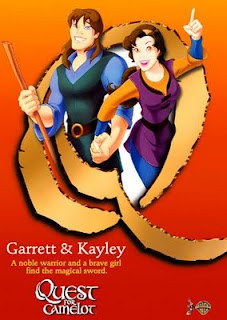 Amazingly, the web site for the 1998 Warner Bros. animated film Quest for Camelot is still active (or, at least, mostly active). There is a lot of information on the site about the making of the film, a trailer, production stills, and coloring pages for the young at heart. There are also interviews with the cast on site, and I believe they are all included on the DVD release of the film.
Posted by The Virtual Society for the Study of Popular Culture and the Middle Ages at 6:18 PM